Finally the time is here, no more updates, no support. This is the beginning of the end for Microsoft’s XP operating system and leaves swathes of users with a dilemma.

It means that there will be no more official security updates and bug fixes for the operating system from Microsoft.

Some governments have negotiated extended support contracts for the OS in a bid to keep users protected.

Security firms said anyone else using the 13-year-old software would be at increased risk of infection and compromise by cyber-thieves.

We can help! Call us on 0151 648 3600 to discuss how to keep your existing computer secure, upgrade your edition of Windows or to replace your computer.

Statistics suggest 20-25% of all users have stuck with XP despite the fact that there have been three major releases of Windows since its debut in 2001.

Some of those existing XP users have struck deals to get security fixes from Microsoft while they complete their migration away from the ageing code. 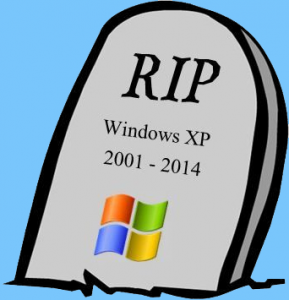 “Our data indicates that less than one fifth of our customers run Windows XP but more than a quarter of infections are Windows XP-based,” he said.

That exposure ratio was only going to get worse after 8 April, he said, once the last security patch for Windows XP had been released.

That final patch will fix a series of bugs, one of which is rated as critical and is already being actively exploited despite only being discovered in late March.

“Effectively, every vulnerability discovered after 8 April will become a zero-day vulnerability – that is, one for which there is not and never will be, a patch,” said Mr Emm.

“Malware writers go for the low hanging fruits because it’s a lot easier to infect systems running on an old Windows XP operating system compared to brand-new Windows 8.1, with all its built-in security features,” they said.

“We think we will see a lot of attacks for Windows XP within the next few months, but attackers will also always add exploits for other Windows systems just to catch those systems as well.”

Many have stuck with XP and ignored newer versions of Windows Orla Cox, a senior manager at cyber-defence firm Symantec’s security response unit, said criminals groups were likely to hoard the XP vulnerabilities they knew about rather than use them to bolster malware being spammed out to millions of people.

“The types of groups sitting on zero-days will tend to use them against high-end targets and for corporate espionage,” she said. “Some organisations will have particular concerns because they find it so hard to move away from XP.”

However, she added, any zero-day that did get used against a corporate target was likely to be re-used later on.

“Once it’s out there it gets into the malware kits and then gets circulated and there will be no defence,” she said.

Mark O’Neill, a spokesman for data management firm Axway, said organisations were getting better at coping with software that had hit its end-of-life.

“Beyond high-profile programs like XP there are a lot of products that have gone out of support because the company behind them has gone out of business or was acquired,” he said.

In addition many other products were written in old programming languages that made them expensive to maintain and update.

As a result, many IT departments have put such ageing programs in the virtual equivalent of a “black box” and subsequently update the external code if security patches need to be applied.

“You can create a layer above the older application and that gives you a place to patch,” Mr O’Neill said.

“Companies are not defenceless even with the things they cannot patch.”

As the owner of Irby Computers it's my job to assist you with any computer problem you have. Whether you're using a computer at home or for your business, we can help! From repairing laptops, upgrading your PC or removing a virus infection, we offer a broad range of computer services. Feel free to contact me direct on 0151 648 3600 or email theshop@irbycomputers.co.uk. Thanks for visiting!

View all posts by: Ben